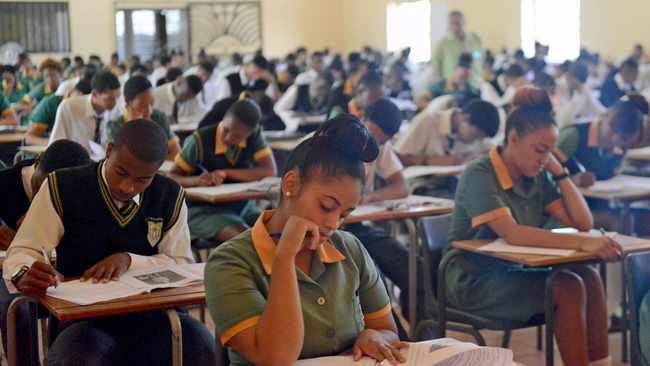 As less than a week remains before the final matric exams kick-off, many Grade 12 pupils have been spending their nights and days preparing. But it has not been without challenges for some of them.

It is the final quarter of the year, and many learners across the country have been preparing for their final exams.

However, it has not been an easy road for some pupils at Dr Beyers Naude Secondary School, Soweto Johannesburg.

As she takes them through a revision of their Biology lesson,  teacher, Nommsa Sithole says that they have been ensuring they study and revise the curriculum even prior to preliminary exams.

She also states that the Covid-19 Pandemic has also been an obstacle because each of them would fall ill randomly which would delay their progress. But despite it all, she would also convene afternoon and holiday classes.

We don’t even mind going to fetch them at their homes and bringing them to school so that they can write their exam, pass and get good results.

Since the beginning of the year, the school has prioritized matric learners to the extent that they have been attending extra lessons on a weekly basis even during weekend.

Ms Sithole adds that they have had the pupils attending classes from 07:00 am to 17:00pm with two timetables, one for normal school and the other for revision classes.

Read: 2021 Matric Exam To Be Postponed Due To Elections In November

The school principal, Victoria Matshiqi says that she believes that they have what it takes to succeed in the upcoming matric exam and adds she always encourages them to strive for success.

Some of the challenges the learners often find themselves having to contend with include not having electricity at home and living in a disruptive environment.

The learners say they will do their best to succeed regardless of the challenges that they may be facing.