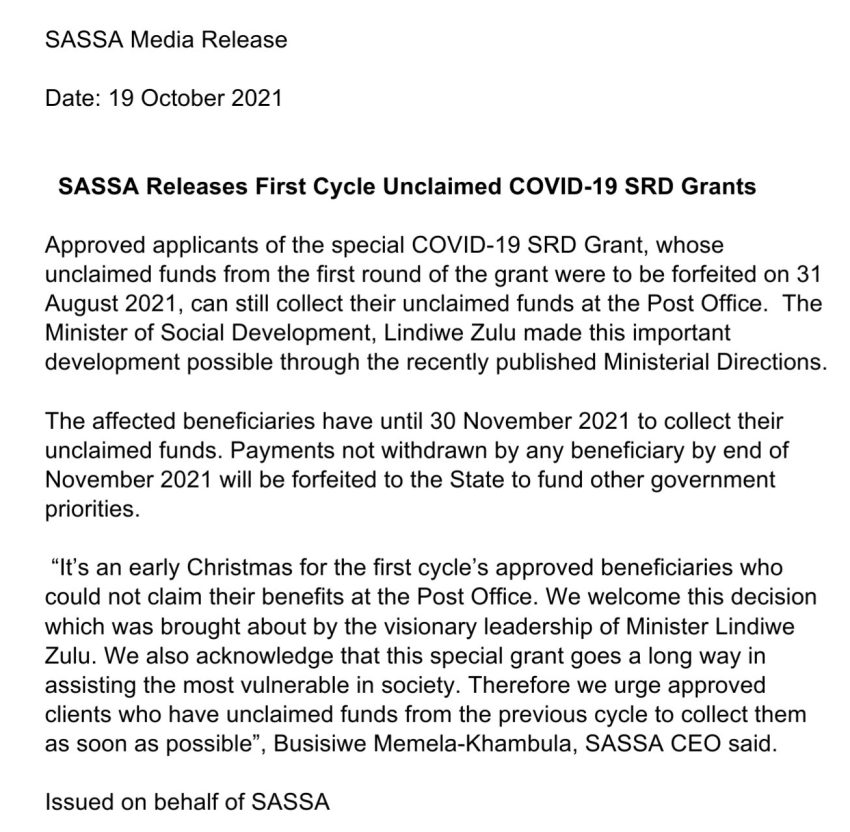 SASSA has announced that unclaimed SRD grant payments can still be collected. The SRD grant is now in it’s second round which will end in March 2022.

On Tuesday morning, SASSA released a statement saying that they have now released unclaimed R350 grant payments from the first round.

Previously, SASSA gave beneficiaries a cut off date for when they could collect grants that were not claimed during the first round. The agency then said that SASSA grants which were not collected by the cutoff date would then be forfeited and given to National Treasury to be redirected.

Now, SASSA has said that those “whose unclaimed funds from the first round of the grant were to be forfeited on 31 August 2021, can still collect their unclaimed funds”.

To collect, you will need to head to your nearest Post Office and present your ID.

The Minister of Social Development, Lindiwe Zulu, made this important development possible through the recently published Ministerial Directions.

The new cutoff date to collect these unclaimed R350 grants is now 30 November 2021.

Just as before, SRD SASSA grant funds which are not collected will be, as SASSA states, “forfeited to the State to fund other government priorities”.

It’s an early Christmas for the first cycle’s approved beneficiaries who could not claim their benefits at the Post Office. We welcome this decision which was brought about by the visionary leadership of Minister Lindiwe Zulu.

The CEO went on to speak about how the SRD grant goes a long way in assisting those who are most vulnerable and urge those with unclaimed SASSA grants to collect their SRD grant money as soon as they can.