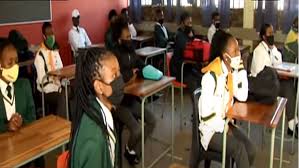 he Gauteng Department of Education (GDE) reported over 73 000 processed Grade 1 and 8 online applications within a day of opening for Phase 2 of the 2022 academic year. Phase 2 follows the first phase of the online applications which took place between August and September 2021. Advertisement

The department said that by midday of the application process, a total of 73 305 successful Grade 1 and 8 applications were recorded on its system.

The Department of Education in Gauteng has successfully achieved a total of 73 305 processed online applications for the 2022 school admissions, which has been also recorded in its system.

Its indicated that phase 2 was primarily aimed parents and guardians whose children will be going to Grade 1 from Grade R and Grade 8 from Grade 7 in the 2022 academic year at Gauteng public schools.

Moreover, the department found that some parents and guardians in Phase 1 were not able to submit their online applications on time for learners in Grade 7 at Gauteng schools.

It appeared that the department had to also give them preference to complete their online applications within the Phase 2 run.

Gauteng education said that a delay on Monday morning was caused by a traffic of 9 000 online applications that waited for their system to open, which caused administrative interruptions to the application process.

Parents and guardians are urged to submit their documents in the department’s system within the period of seven days or submit the documents to relevant schools they applied to.

The education department praised the efficiency of their system, saying that unprecedented progress was made during the online admissions. It has also reiterated that the two-phase system was a trial and its results has surpassed their expectations.

The GDE MEC, Panyaza Lesufi, took time to thank all parents that were successfully able to follow the guidelines when applying for their children through the online system.
All parents and guardians who still face documentation problems will be helped, said the department.

GDE however encouraged parents to send their children for vaccination as the country was recently moved to alert level 2.

The GDE also confirmed that they will remain available on all platforms which include social media, call centres, and designated walk-in stations.