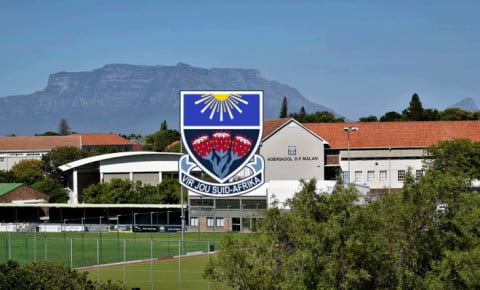 New developments are said to be underway at DF Malan Hoerskool as the school has been in talks to settle on a new name. While many welcomed the name change, a group of parents, pupils, and academics started a Facebook group titled “Trots DF Malan ”  to gather support to retain the existing name.

DF Malan is said to be singing a different tune from what seemed to be a total disregard of the democratic process to have the school name changed.

The school School Governing Body (SGB) had declined a referendum proposed by parents on the name change.

DF Malan Chairperson, Andre Roux says the process of the name change is inevitable and the school can’t keep ignoring it for the next SGB to rule on it.

The SGB decided to allow the process of engagements in order to hear the views of others as provided by the democratic process.

We realised we can’t keep kicking the issue down the road for the next governing body to deal with.

Roux indicated that the intentions to change the DF Malan name started in the early 2000s and continued to persist.

The SGB is said to have shortlisted two-name suggestions from the hundreds of submissions that were made.

The two names are DF Academy and Protea Academy, with the first name suggestion still determined to keep the two letters from the original name.

The SGB Chair insisted that DF Malan the politician and DF Malan the school are two different entities with a distinct purpose.

On 15 October 2021, the voting process of choosing the name from the final two names will be underway.

The negative publicity and different views which surrounds the name change process holds the school’s progress back, said Roux.

The decision behind the agreed engagements is also encouraged by the needs of the majority who continues to be part of the school.

Over 600 suggestions were made available online for parents, Academics, and learners to choose a name which had a suitable meaning to them. The voting process then came down to 325 names, where a decision on the two names was made, the SGB Chair said.

The final voting results on the two names will be forwarded to the Western Cape Department of Education for approval.